Climate Action is building a Climate Coalition of groups who are working for action on the climate change, be it by lobbying local government, supporting individuals to act, or in other ways.

What is the Climate Coalition Leicester and Leicestershire?
We are: a network of organisations who are jointly lobbying our local authorities, and their economic partnerships, to take the drastic action needed on climate change and carbon reduction.
Vision: A greener, safer, healthier Leicester and Leicestershire and world, where in tackling climate change we have also strengthened our capacity to survive in community, addressed issues of global and local poverty, exploitation and responsibility and are happier.
Aims: To gather organisations who all support that same vision, and who represent the diverse parts of our community, and the many people within them. To use this strength in numbers and diversity to have a stronger, more persuasive voice in lobbying local authorities, and their economic partners, to act now to reduce our region’s carbon emissions.
We will: support and challenge our local authorities, economic partners, our own organisations, in taking steps to tackle the climate crisis and realise our vision.

For more information on what being a coalition partner involves please go to our outline. If you’d like to join, we’d love to hear from you. You can also download our partners form here.

So far the Climate Coalition Leicester and Leicestershire has the following partners:

Climate Action Leicester and Leicestershire. That’s us, on this website!

South Highfields Neighbours. We are an active residents group living in Highfields. On climate change we work with local schools, organisations and our neighbours to increase awareness of the issues and encourage positive action. We are concerned about climate justice as many of our residents have family and friends in countries already badly affected by the climate emergency.

Global Justice Leicester is a  local branch of Global Justice Now which campaigns for a world in which resources are controlled by the many not the few. We work in solidarity with social movements to fight the causes of poverty and injustice. Our organisation campaigns particularly on climate justice for developing countries in the global south who have contributed little to the current crisis but suffer disproportionately from its effects and the actions of multinational corporations which they  have difficulty in controlling. We work in solidarity with partner organisations in the global south and run campaigns against banks and fossil fuel companies.

Leicester Friends of the Earth. We’re a grassroots environmental action group. We campaign on issues such as climate change, fracking, air pollution and plastic.

Climate Strike Leicester. We are the student-led organisers for the Leicester-based school strikes, fighting for climate action. We organise and stage strikes to protest governments’ inaction against the growing global crisis that is climate change and strive to increase popular awareness of the issue through leafleting, speeches, and marches.

Hindu Climate Action. Hindu Climate Action is a service project of the Oxford Centre for Hindu Studies (OCHS). We work with the Hindu community to raise awareness on climate change, highlight the importance of environmental protection in the Hindu tradition and provide resources to help individuals and organisations to go green!

Leicester Quakers. Quakers try to spread the message that climate change affects us all but especially those in the Global South where food supply and infrastructure are the most vulnerable. For this reason we have a strong commitment to climate justice, supporting migrants and asylum seekers and pursuing a new world economy based on human values not just money. This is all underpinned by our spiritual practice where we meet together in silence waiting for the wisdom to know how we should live our lives.

Muslim Green Guardians. We are a group of environment-conscious Muslims in Leicester. Our aims are to help other Muslims lead more sustainable lifestyles and to educate Leicester’s Muslim community about their responsibility to the environment according to the teachings of our religion.

Green Christian Leicester City Group. We are a local group of Green Christian which is a community of ordinary Christians from all backgrounds and traditions who seek to: let loose hope in this damaged, exploited and unjust-world; pioneer practical discipleship in shared prayer, struggle and action; equip prophetic witness through our campaigns and resources; empower agents of change in churches and the green movement.

GreenLight. We are a missional community group linked to Holy Trinity Church who connect Christ, Creation and Community. We are passionate about caring for the world and engage in regular discussions about the climate emergency with the council, our church and our friends. We have held prayer vigils for climate change at key points as well as joined with others to march and call for positive action. We look to find practical solutions though lifestyle changes too and are promoting the Eco Church award scheme.

Footpaths: routes to a greener life. We run support groups for people in Leicester and Leicestershire who want to reduce their personal carbon footprints in a supportive and structured group. Click here to see a short 3 minute clip of participants talking about their experience of doing a Footpaths course.

Extinction Rebellion Leicester. We are Leicester’s branch of the international movement aimed at halting mass extinction and minimisingthe risk of social collapse. We do this in various ways including increasing public awareness of the climate and biodiversity crisis, lobbying councils and by using non-violent civil disobedience.

Leicester Green Party. We are a local, active political party, fighting for environmental and social justice, demanding local transparency and scrutiny of our council. We are also working to ensure that Leicester takes the Climate Emergency seriously.

Women’s EqualityParty, Leicester and Leicestershire. We are the local branch of the national Women’s Equality Party who have promised to “do politics differently” so are building climate and environmental concerns into all of our policies. Our branch is working with the other UK branches who are addressing specific areas of climate change.

Leicestershire Labour for a Green New Deal. The 2019 Labour Party manifesto outlined an ambitious programme to deal with climate emergency that is affecting us all. Current policy is not working. This policy focuses on the role of the individual (i.e. change your behaviour) and plays down the need for massive state investment. We are campaigning for a Green New Deal that will expand public ownership, rapidly decarbonise our economy, create millions of good green jobs and provide a just transition.

Red Leicester Choir. Red Leicester is Leicester’s socialist choir singing songs expressive of social and political protest, and songs of worldwide celebration, struggle and change.  We have taken part in climate action events with various organisations and are committed to campaigning for this cause.

Leicester Car Sharing Club is Leicester’s longest established vehicle sharing scheme. Currently has around twenty members across the City sharing five vehicles so keeps cars off the road. Organised as a voluntary democracy with meetings around every six weeks. Has been a role model for other schemes across the country. Efficient on-line booking system plus co-operation between members ensures functionality. Leicester City Council is supportive but the scheme is self-financing.

Harborough Woodland. We are rapidly growing into a large community volunteer not for profit group promoting and enabling the responsible expansion of wooded areas, trees or hedges around Market Harborough and District from Northamptonshire to Rutland for air quality, carbon capture, physical and mental health  benefit and flood risk reduction.

Transition Leicester. Our core message is to support any work that moves the community from oil dependency to local resilience.

Sustainable Harborough Community. We aspire to be the independent environmental voice and practical action of the concerned residents and businesses of Market Harborough and its surrounding area. We aim to bring together in a Community the many environmental and sustainable groups, individuals and projects that now exist to present a strong local green voice to work positively with our MPs and Local Government. 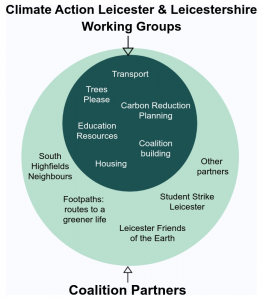 If your group, organisation or community wants to join the Climate Coalition as a partner, we ask that you:

The overall goals which Coalition partners support are: