Click here for information on our afternoon of action ‘Stand up for Climate Justice’ on the 6th November. 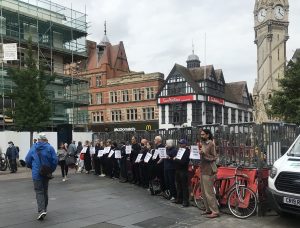 We have started holding regular silent climate vigils in Leicester at the Clock Tower, Gallowtree Gate. They are a chance to stand up for what we care about, to meet and chat with others who also care (afterwards – the vigils are silent) and to get people thinking and specific aspects of the climate crisis. Climate Action will bring placards and flyers. They’ll be held on the 2nd Monday 12-1pm and the 4th Friday 5-6pm of each month. Details will be posted here. Please join us! Wear black or white. 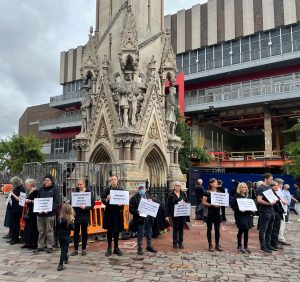 The next vigil is Fri 22nd Oct, 5-6pm, and will focus on COP26 (the international climate conference which the UK is hosting in November) and what the UK should be doing in advance of this conference – such as funding green retrofit for homes, not funding or supporting new fossil fuels, not building new roads or airports, supporting new wind and solar generation, requiring new cars not to be fossil fuelled, etc. You can see the flyer we’ll be using here. 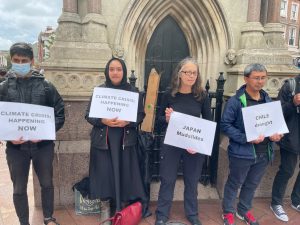 After that we have plans to cover: The impact of the climate crisis on people and places across the world right now. This was the topic of our first two vigils and we will return to it. Flyer here. Climate Justice and Climate Colonialism, Shell in Nigeria, UK divestment from fossil companies, and more. Please do get in touch via our contact page if you’d like to contribute ideas or be part of the vigil planning group. The hope is to use the vigils to think about specific climate issues in detail, as well as to meet each other and raise awareness locally.

Greenwashing vs Renewable Energy Generation: which energy suppliers are making a positive difference?  A lot of us think we are with a green energy company, but actually there’s a lot of greenwashing in this area. Climate Action L+L has just run an event to clarify things. You can see the slides (including ones not used in the actual event on other companies) here or watch a recording of the talk and debate here. 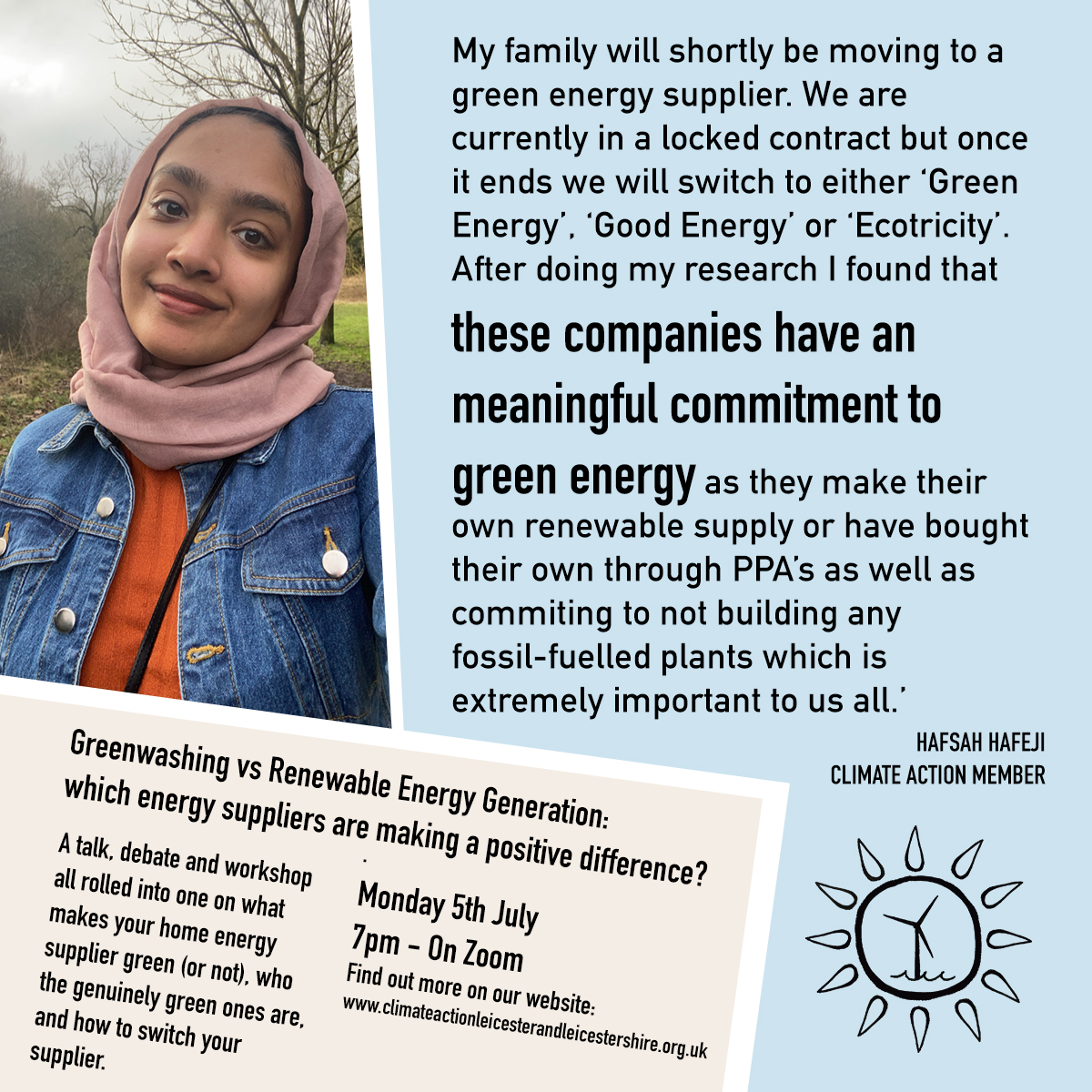 It consists of a half hour talk + Q&A on what energy companies are doing to support renewable generation and how most of them are greenwashing themselves.
This is followed by a half hour debate + Q&A on what the differences are between the actually green suppliers – which one ticks your boxes?

People look for different things with their energy company when they care about the climate crisis.

Why not watch our Greenwashing vs Renewable Energy Generation Event here, and find out which company you want to be with? 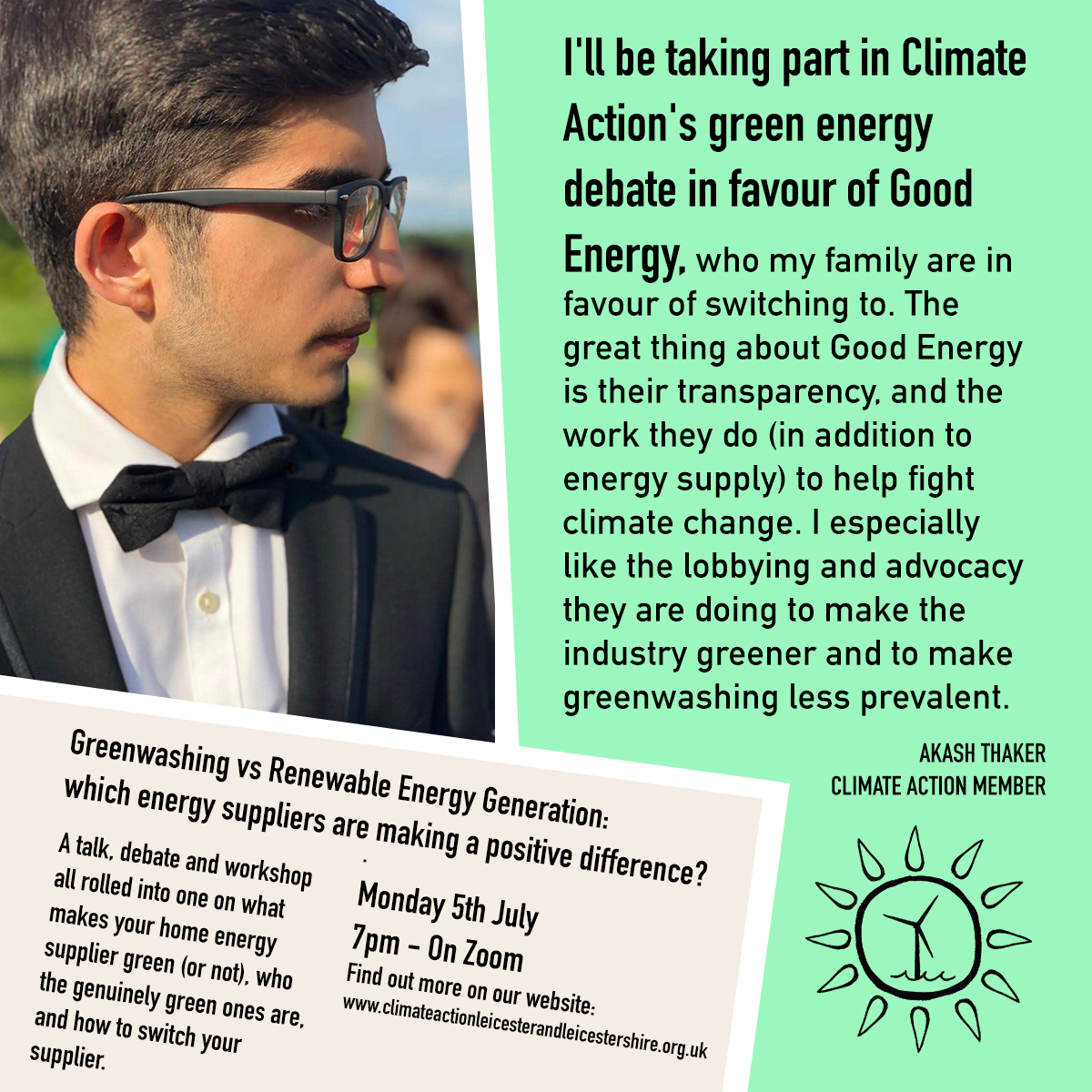 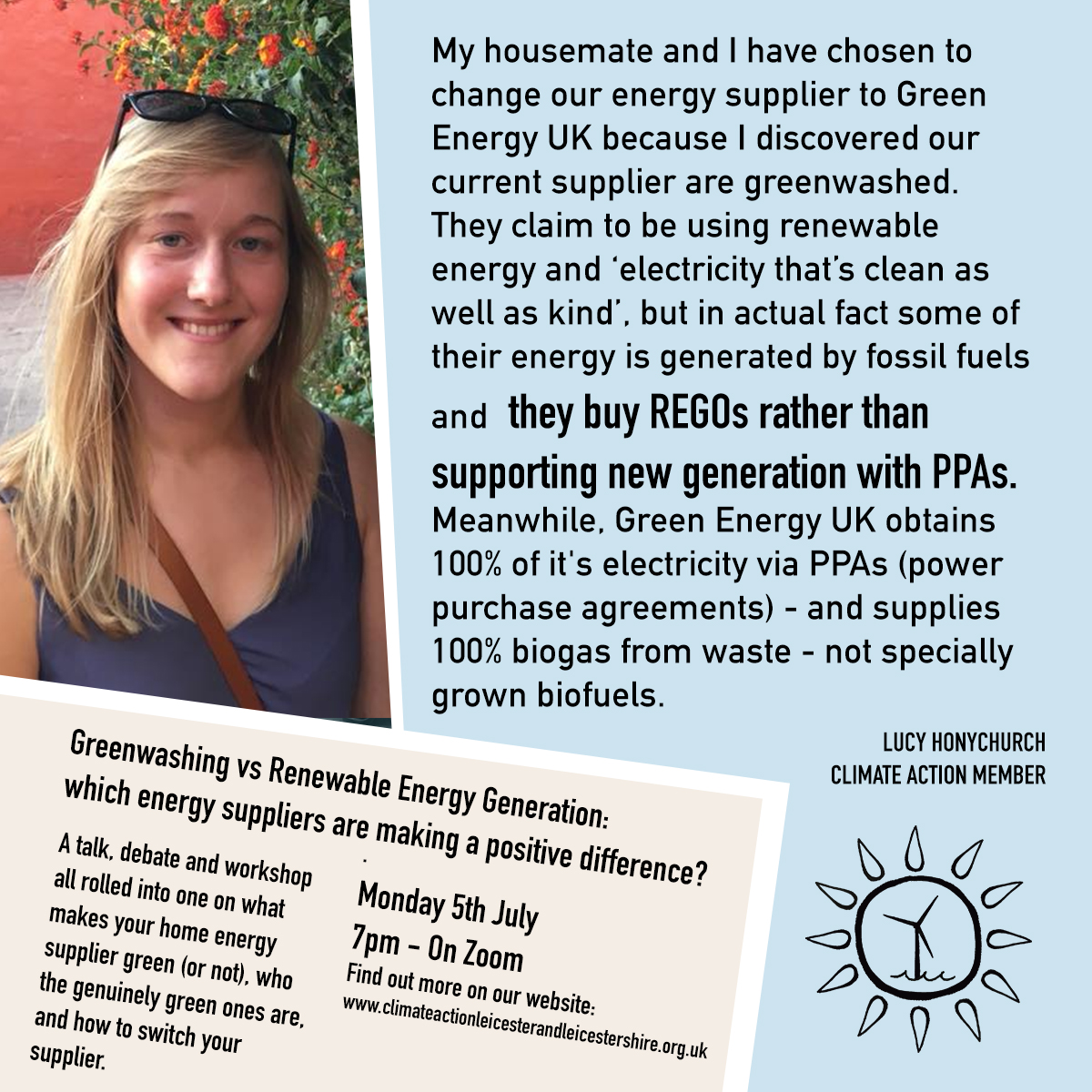 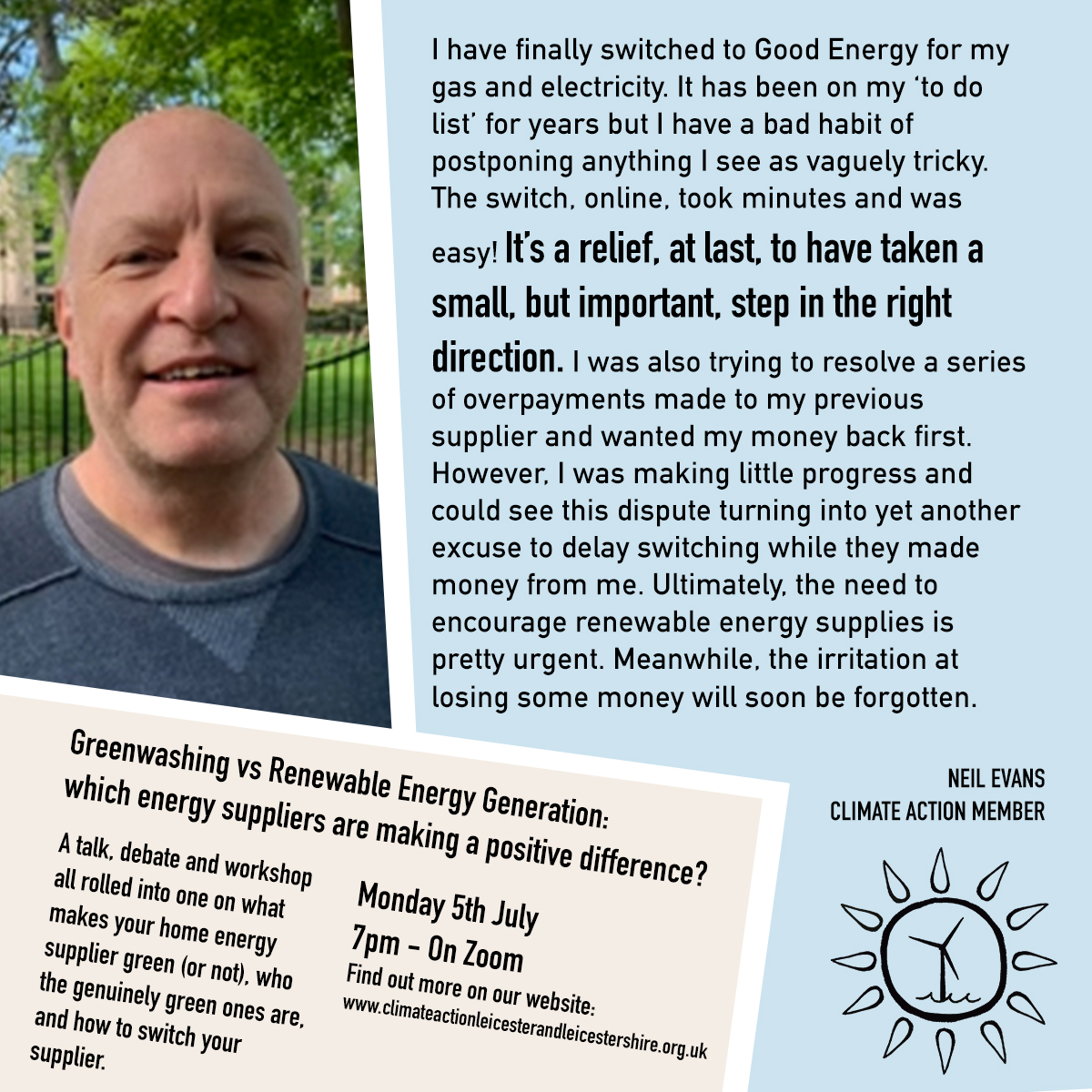 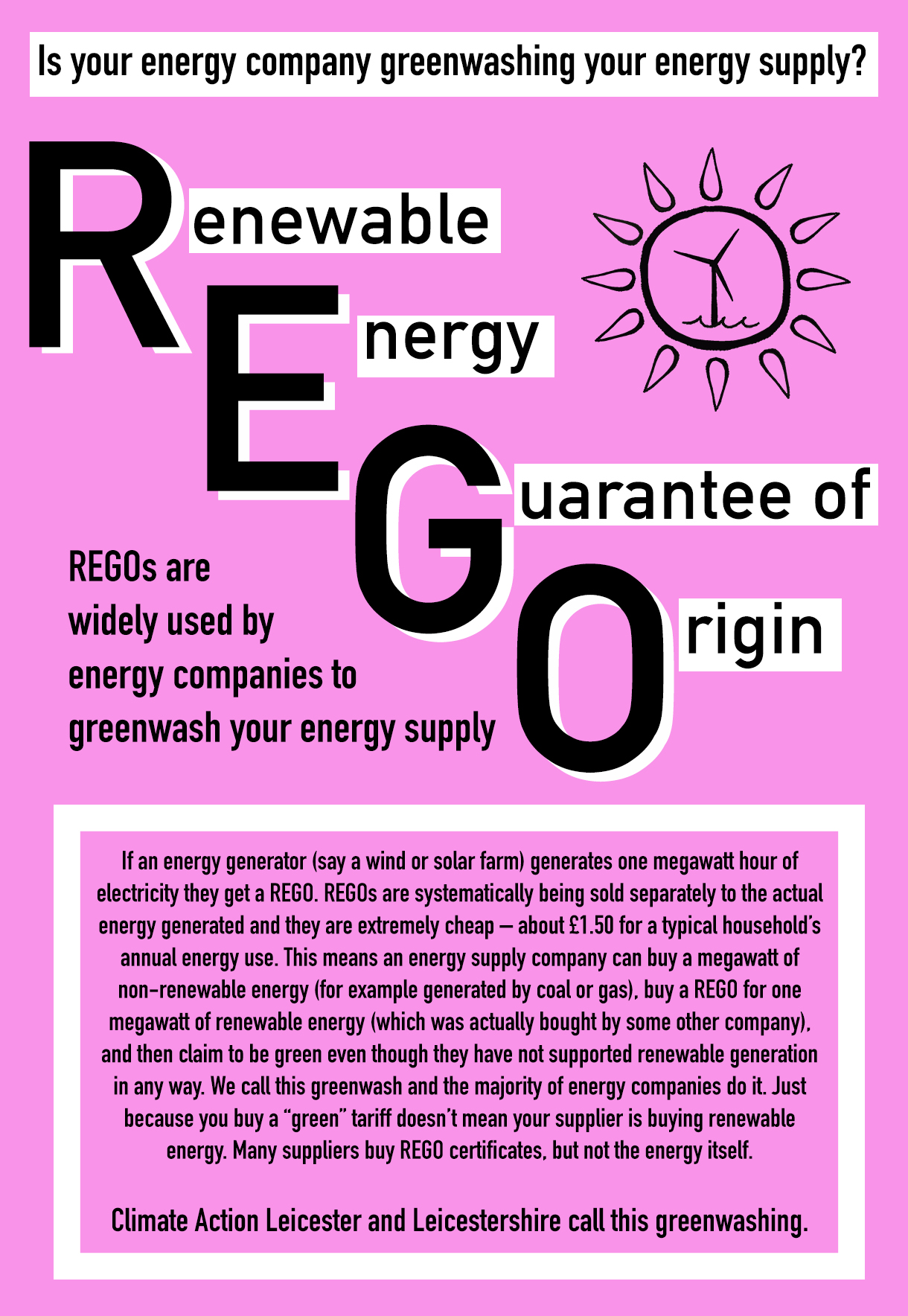 When we first started as an organisation, we spent a lot of time and energy responding and support individuals to respond to Leicester City Council’s Climate Conversation Consultation. The Council’s action plan coming out of this consultation can now be found here, and while it makes a start, we had hoped for far stronger action. Therefore Climate Action has responded to the action plan – and 17 of the organisations in our Climate Coalitions have endorsed ther reponse. You can see our response here. Now we wait to see if it improves. 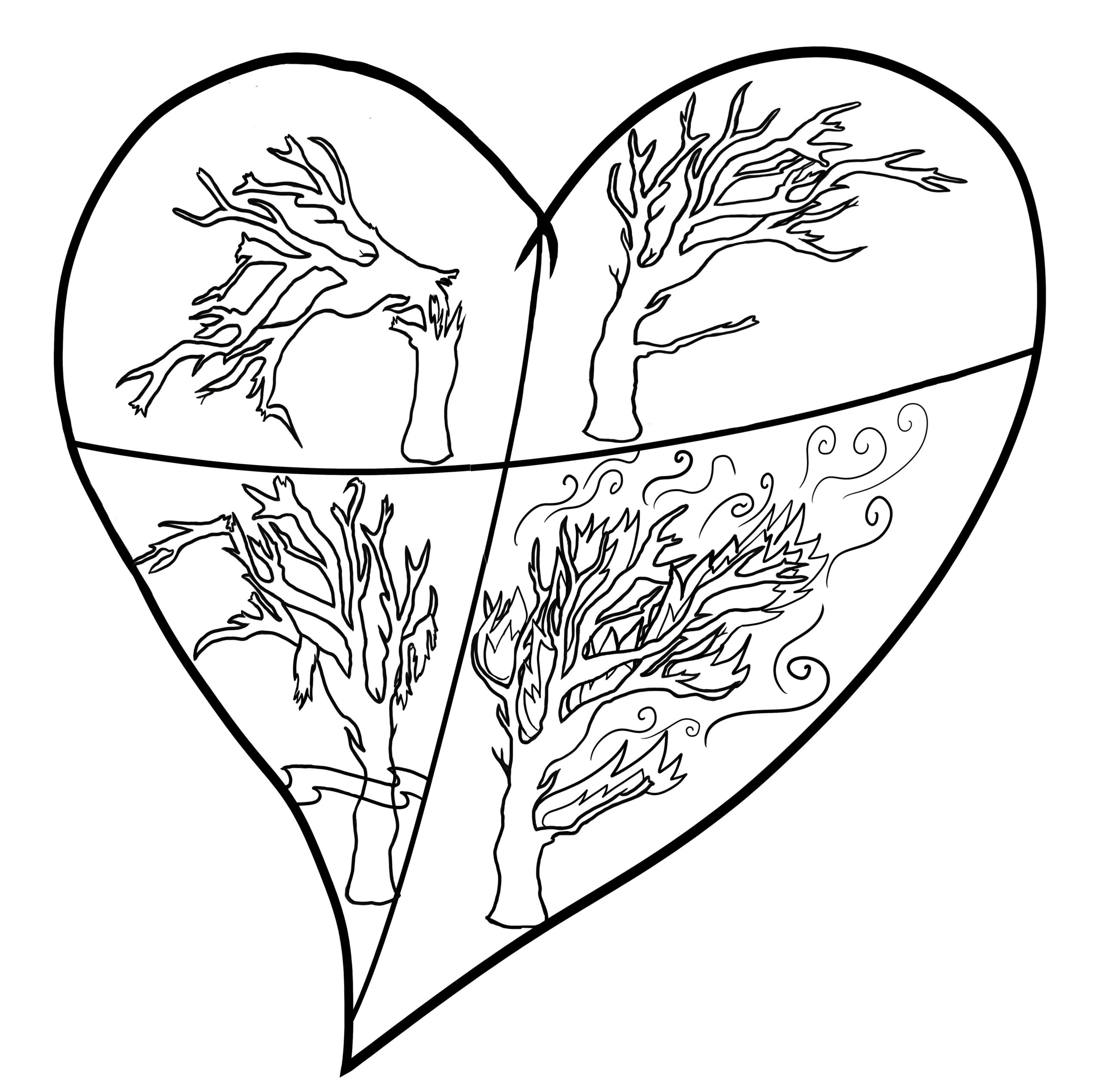 We hope you will be inspired to take action against climate change as a result of the 3 day ‘Climate and Me’ event we’ve just run, so we’ve set up a page with many suggestions of things you could do – and the opportunity to pledge to do specific things or make up your own pledge – have a look here and see if there is something (or more than one thing) you can do.

Climate and Me included:
~ Spirituality and the Climate Crisis. Discussion about the links between faith and the climate with speakers Amenah Patel from Leicester’s Muslim community, Devena Chouhan of Hindu Climate Action, Dr Hardeep Singh from EcoSikhUK, Rachel Benn from Leicester’s Jewish community, and Christians Erica and Anthony Lees-Smith. This was recorded and is available to watch here.
~ People sharing their personal experiences of living with, or watching other people, experience climate change around the world. Speaking about places including Afghanistan, Vietnam, Derbyshire, Kenya, Sri Lanka, Jamaica, India and Australia and the Gambia. These are available to watch here.
~ Click here to find the other ‘Climate and Me’ events which we have slides or recordings for.

THANK YOU to all of you who responded to – and helped other people to respond to – the Local Plan! Our work is already having results:

· We are starting to get letters back from our councillors now (11 of them so far).
· We have also had meetings about the Local Plan with Adam Clarke (Deputy City Mayor for environment and transport) and the councillors of Castle ward who include Danny Myers (Deputy City Mayor for Policy Delivery and Communications). Both of them have agreed to a further meeting with us.

· We’ve gained some new members for our Climate Coalition: Hindu Climate Action, Leicester Environmental Youth Board, the local branch of the Women’s Equality Party and Green Christian Leicester City. There are other groups considering joining too. The Climate Coalition was key in supporting people to respond to the Local Plan, and thanks to them 15 organisations endorsed our alternative Local Plan!
· Additionally, our membership has increased by over a hundred and our social media  has also gained loads of followers.
So, again, THANK YOU!!!